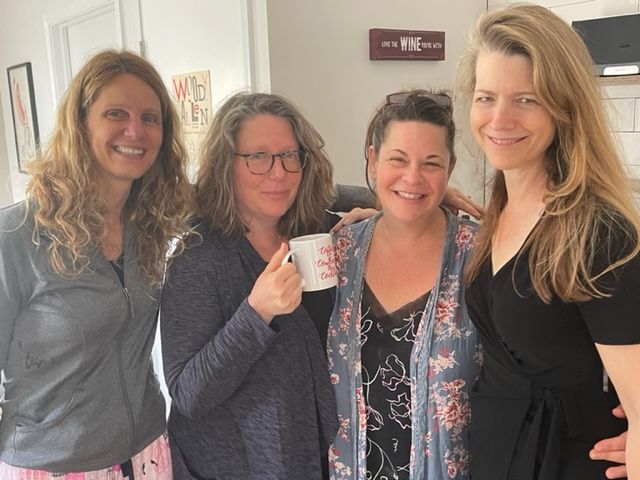 You only get one group of THOSE college friends.

You know the ones I mean.  In our case, we spent from 9 am - 1 pm together, and then depending on what shows we were working on, we were together from 7 pm - 11:00 pm.  Then of course, going across the street for Irish nachos and drinks until 1 am.  We were inseparable, less by choice than circumstance, and it was wonderful. And sometimes, terrible!  But mostly, even at the time and most definitely in retrospect, wonderful.

We had a reunion at the 20-year mark. Then in 2021, we lost one of our number to Covid.  Though we could not get together at the 30-year date, we were determined to gather this year.  The house was rented. The airline tickets were purchased.  The die was cast.

I, who live locally and work near the airport, volunteered to pick up the latest of our out of town arrivals.  My plan was to drop them off, administer and receive the long-yearned-for hugs, then go to my own home and sleep in my own bed, a commuter, rather than a resident, at this reunion.

Then I walked in.

There were photos, dark chocolate, laughter, windows open to the night air.  I, who go to sleep much earlier now than I did in those days and had worked a full day before my airport shuttle duties and its thirty orbits around Terminal 3, was exhilarated instead of exhausted.  Against all reason, I was wide awake as the clock stuck midnight when my friends said..."Jenny, you could sleep on the couch..."

And as you know...couches and I have a special relationship.  I stayed.

My sister and her friends had a maxim in college: it's not part of your wardrobe until you've slept in it. Well, by the next morning, the wardrobe officially welcomed the dress I'd gone to work in the day before.  And as I shuffled from the couch to the kitchen for a generous pout of morning coffee, my friend Sarah said I was "sliding towards home," a loving reframe of what back in college we would have called "the walk of shame," immortalized in this photo.

Over the course of the weekend, we got through it all: Love. Loss. What We Didn't Know. What We Now Know.  What We Thought We Knew.  What We Will Never Understand.  Why It Took Us So Long To Get Together From The Last Time.

And most of all - gratitude that somehow or other, we have forgiven ourselves and one another enough that we can be with each other as we are now, unburdened by who we were then.