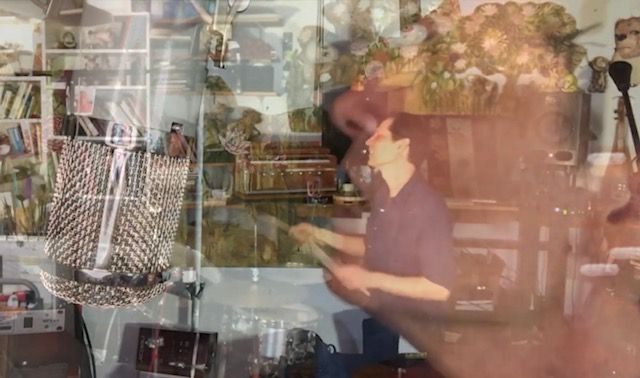 This week, the collaboration blog transforms into the Creativity & Collaboration blog.  And who better as a contributor?  None other than Steve Dawson, with whom I am privileged to sing this Friday, October 15, as part of the band for the release of his album LAST FLIGHT OUT.

As a gentle reader of my work, you are no doubt aware of Steve's influence on me as a writer, producer, teacher and all-around inspiring artist, not to mention dear and long-standing friend.

After 18 months of anticipation, the band he has assembled under the heading Funeral Bonsai Wedding, including John Abbey, Jason Adasiewicz, Gerald Dowd, Diane Christiansen, Alton Smith, and Quartet Parapluie, is poised to celebrate the release of LAST FLIGHT OUT.

I really hope you can join us at The Old Town School of Folk Music to experience the particular kind of magic Steve weaves into his music, his collaborations with musicians, and with the audience.

There is really nothing like it. You will be glad you have lived long enough to witness it.

A wonderful article on him has come out in Lonesome Highway.  Give yourself a moment.  Reflect on a life in music and art with one of Chicago‘s truly great artists, and let it give you a few thoughts about your own life while you're at it.

Meanwhile, the day after Steve's album release, Saturday, October 16 at 1 pm, I’ll be giving a workshop called Little Epiphanies, about the joy of discovery in the creative process.

Join us for that too, if you like. You can learn more about it here: https://www.oldtownschool.org/classes/detail/?courseid=7031

"Steve Dawson has been an integral part of the Chicago music scene for many years, culminating in an Esteemed Artist Award, in 2020. The city of Chicago wanted to recognize his body of work and to support his creative muse.

Whether working as an engineer/producer from his home studio or pioneering new music with his various projects; solo work / Dolly Varden / Funeral Bonsai Wedding; Steve Dawson has always been an innovator, searching for new artistic expression in music.

His Dolly Varden band and albums have always received wide critical acclaim and with his new solo album, AT THE BOTTOM OF A CANYON IN THE BRANCHES OF A TREE, he arrives at a very interesting phase in his musical development. It is certainly one of the albums of the year and, like many truly inspiring works, it incorporates great individuality and rich expression.

We were delighted to catch up with Steve recently and take a look back at his fascinating career, while learning much about what constitutes a successful life in music in these changing times..."

Finish reading it at https://www.lonesomehighway.com/interviewsold/2021/10/2/steve-dawson-interview.