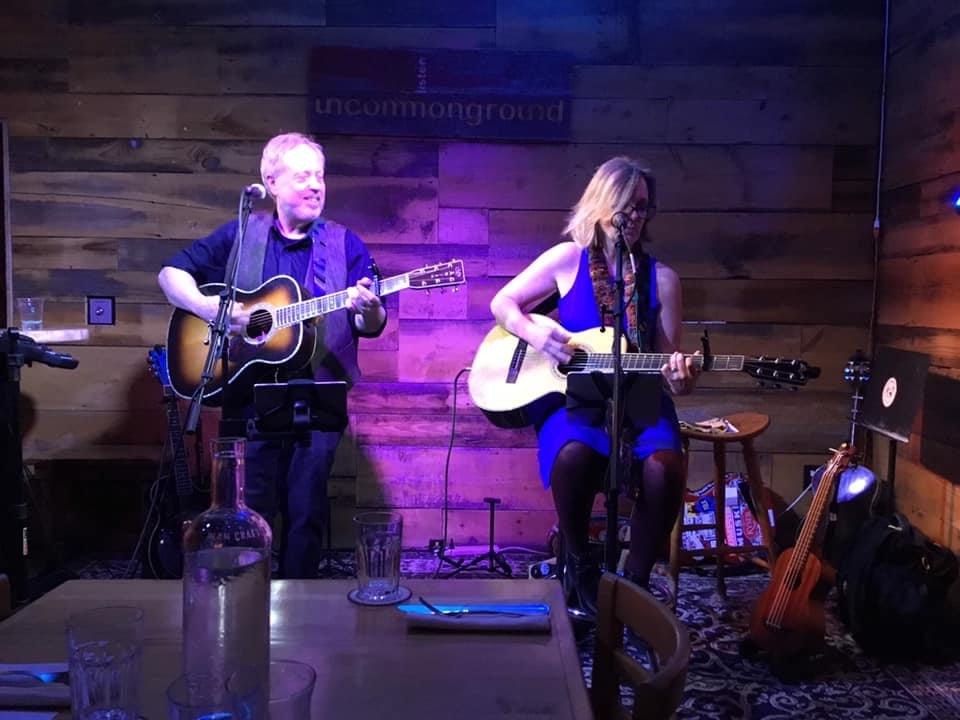 Ilsabe's reviews say it all: "Great lyrics, distinctively sung," "a voice that's comfortable being both playful and plaintive," and my favorite: "Wherever her muse leads her will be a place worth visiting."

Ilsabe O’Connell-Schlingensiepen Curley, in addition to being a solo singer/songwriter, one half of the duo Earnest and Troubled, and a skilled healthcare worker, is fluent in German.  Is there nothing she can't do?!?

I think you will love hearing her thoughts on collaboration. This is her and her husband James Curley's second Haiku Milieu song, featured at the July 15, 2021 Haiku Milieu show at Uncommon Ground. You can see their first video here.

"It's hard to choose among the many delicious haikus in Jenny's Haiku Milieu, so when occasional song collaborator and 24/7 helpmate James presented me with a pared down selection of five to choose from, I was sufficiently satisfied.

Tell me your story / begin at the beginning / and leave nothing out.

At first this haiku suggested to me two people sitting across from each other at a table, each wanting to get to know the other better. Each knows that it's hardly possible to 'leave nothing out' or even to 'begin at the (very) beginning' of one's story, but they nonetheless gaze adoringly and a tad coquettishly into each other's eyes as if to say, "I know this could take a very long time, but who cares! For this one, I've got ALL DAY."

After a while, as James and I keep tossing ideas back and forth at each other (he in a particularly coquettish way), it occurs to me that two people sitting across the table from each other, while they might hope to one day fall in love and bask in each other's stories, might on THIS day, rather, be trying to figure out if the relationship is worth further investment or a waste of time after two and a half dates -- a certain mistrust and weariness, then, driving the request to "leave nothing out." No surprises. . .again. Please!

Soon, however, a third possibility presents itself. What if the two characters sitting across from each other are related through crime? One is an interrogator, the other a suspect. The interrogator sarcastically encourages the suspect to "leave nothing out," but each of them knows there's a lot of important detail that will remain missing. Both seek closure, if not always the truth.

The chorus, "It's not appropriate, you should know better..." refers to the characters' own internal monologues. They reprimand themselves, "Will my story win out over the other story? Will my story be believed, even if I'm being totally honest (which I totally am)? Will I tell it correctly or will it fail from lack of sophistication or finesse? Will my feelings of inadequacy overtake me or will I finally start using my head?!

After a while the interrogator and the suspect in OUR story/song/haiku seem to break from their assigned roles and recognize each other's vulnerabilities. They come to understand that WE're part of the same sometimes argumentative, sometimes inappropriate chorus, and that we could each, as we sit across from each other at the table, also bring a whole lot more understanding and compassion to it.  Though the verses play it cool with their call-and-response, ask-and-answer repartee, the songwriters realize that deadlines approach, that the story/song/haiku is always far more complex than it originally appears, that we could keep telling this story ALL DAY.

In the final chorus, we recognize that we shouldn't overthink the story/song/haiku, but have fun with it and be grateful that we are part of this incredible project, sitting at this incredibly abundant table among this incredible gathering of hearts.

So that's my story, from the beginning, and trying at least to leave nothing out.  Thanks for asking, Jenny!"
- Ilsabe Curley