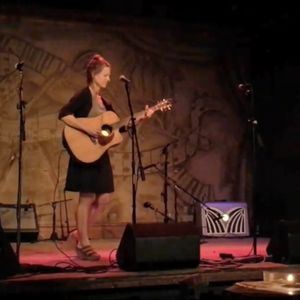 This unreleased song is called "Let 'Em Get Away," from back in the day. Thank you to Marshall Hjertsted for the video.

Life is so funny.  I wanted to talk about the mid-life crisis in this blog today.  How I tried to anticipate it, how I tried to believe that I could escape it by just doing the things people bemoan that they didn't do.  By and large, I did those things, I still do, and yet...I have to wonder if I did it right.  The midlife crisis has not left me unscathed.

It was taking too long to say what I just said.  I was boring myself, so I scrapped it.  Instead, I went in search of some kind of oldie but goodie video to make up for the lack of a Collaboration and Creativity blog.  I was previewing it to make sure there were no wardrobe malfunctions or anything, and it struck me...this song is about a mid-life crisis.

When I wrote it, I had just released the album, "Every Soul Grows to the Light."  Epic changes in work and life were afoot, the monthly concerts at FitzGerald's had just begun, and I needed new songs. I would start haikuing within a month of this performance.

This song was commissioned by a dear friend as part of the Indiegogo campaign for the album.  I'd been thinking about him, and mulling ideas over in my mind, when I received a jury summons.  Around that same time, I had occasion to be driving past the courthouse on California Avenue on the West side of Chicago.  In the way they do when you're not paying attention, the stars began to align and the song began to write itself.

You would never know my friend's name, and that's the way he wants it. He has changed countless lives in the course of his career as an attorney, but that's not how he started out in life.

He had a a rough upbringing on the South side of Chicago in a family with too many kids and not enough money.  He remembers a very clear intent to mortally wound his brother, but his hand was stayed by an older relative. A few years later, despite the devoted mentorship of his girlfriend's father, he ran afoul of that family as well as his own, and got into the kind of trouble that would keep someone from being gainfully employed later in life. Only because the laws were less strict than they are now was he able to pay his debt to society, excel in law school, and become a highly respected attorney.  He has the heart of a lion, but the only reason I even know him is that he got away.

Even if your circumstances were less dire than my friend's, somehow or other, you have to keep the lights on and a roof over your head.  I've often thought that the necessity of having to work is an overall net positive.  Every day, if at times begrudgingly, I get down on my knees and thank God that I "had to" learn how to do something I didn't want to learn how to do, largely because of my day job.

The hope is that all the hours you spend at your day job enriching yourself are also in some way, shape or form making the world a better place.

My friend, I gathered over the years of our friendship, at times questioned whether in the end, his contributions would net to the positive for the world, not just for himself and his family.

And you know what?  I wonder the same thing about myself.

As I drove past the courthouse on California Avenue, then down Lake Street past OPRF where my daughter went to school, turning left on East Avenue going past Fenwick where my son was a student, I was thinking about what it means to "get away."  Those times I'd drawn a hard line, did I do right?  Or how about those times I'd been lenient?  Did I help or did I hurt?  All the while, the song was writing itself in the back of my mind.

And suddenly, we're back to the midlife crisis.

Did I do it right?  I don't know.  I sure hope so.  But even if I had done everything differently, I'd still probably wonder.

And that's the jumping off point for this song.  The judge, evaluating his life, wonders if he's done good, or if he's just done well.

I guess what comes to me is this: whoever you are, even if you live your life to the limits of your integrity and do your very best in every arena, you're going to make mistakes.  You're still going to -- make that HAVE TO -- wonder if you did it right.

There is no way around the midlife crisis, only through it.

So to my friend, to myself, and perhaps to you, rest easier.  Even if you had done it differently, you'd still be wondering.

Let 'Em Get Away (The Laws)
by Jenny Bienemann

13 years old
standing over my brother
with a rake
had him pinned to the kitchen table
the table breaks
my father runs in
says "this isn't the way!"
my brother lied but my dad said
"Let him get away."

At 57
I preside over them
in court
sometimes they come
before me, heavy
with remorse
when their lawyer runs in
and he carries the day
that's when the law says
"Let them get away."