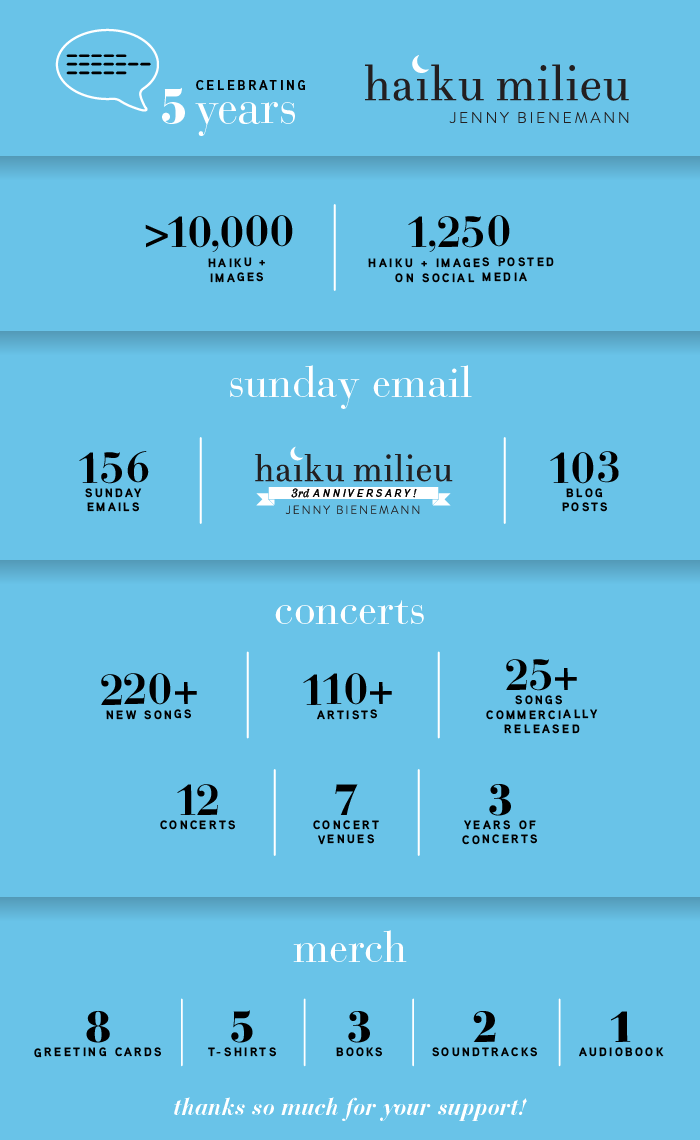 FIVE YEARS!  September 10 marks five years of creating an image, and writing haiku.  Everything else that Haiku Milieu has done or will do, grows from the simple decision to do a little something every day.

I remember why I started.  I remember how simultaneously difficult and revivifying.  I think I wanted to minimize how difficult it is to begin again, once you have let creative endeavor lapse, and thought that taking a photo and writing every day would help with that.

But I also had noticed that my friends who journaled a lot seemed to know their own minds (especially Carley Baer and James Hall) and could be articulate very quickly about what was important to them, and why.  So I was trying to figure out how I could do my version of that.

Five years on, what have I learned?

But...inspiration inarguably comes faster than it did, now that it doesn't have to have to blast its way through the compacted rock of my resistance.

- You get an idea, you follow it THEN. Saving it for later can be done, but rarely do you recapture the intensity of the initial lightning strike.  Better to sketch an outline into your phone, on the back of an envelope, or in the margins of your professional writing, than to let it evaporate into a taunting half-memory.

- Other people are more than willing, happy even, to give me a second to write a burst of inspiration down, even if we are in the middle of an intense conversation, and I feel less apologetic about asking for it.

- Consistency is your friend. Greeting the page/guitar/art supplies on as close to a daily basis as possible, can be more important than how long you actually "practice" your particular act of creation.  Even 10 minutes can work, if you do it with heart and not just to get it done.

- Consistency turns into momentum. Momentum turns into less effort on your part, and you'd be surprised at how quickly that turns into joy.

- Joy turns into trust and trust turns into openness, which turns into making more things, in a beautiful, ever renewing cycle. You start to lose yourself in the best possible sense, which is to say, losing track of who you think you are SUPPOSED to be, only to find yourself as you ACTUALLY are, at the very heart of a Universe who is itself continually making things and making things new, you among them.

And that is the best place of all to be. If you would like to join the Haiku Milieu Sunday Email club, I'd love to have you.  Go to haikumilieu.com.