Kira Small: You Don't Have To Read Music To Nail It To the Wall 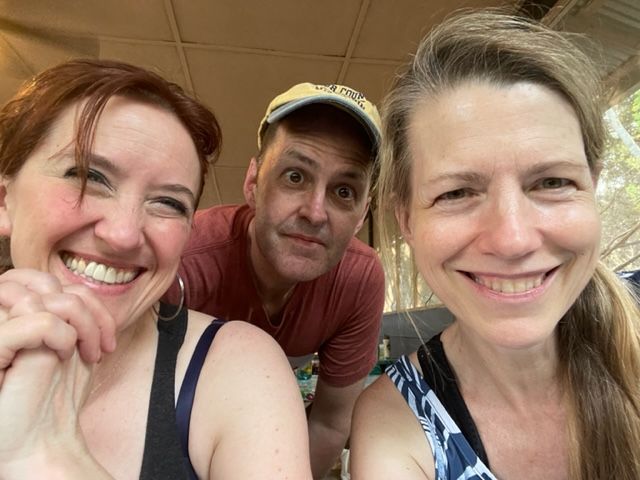 Continuing our Texas theme for the final blog of June 2022, I wanted to share a piece of writing by our dear friend Kira Small.

We met years ago at a music conference, see each other rarely, and keep in touch via the Social Medias.  When she announced, "Kerrville, I'm home!" I "loved" it on FB and hoped our paths would cross - and they did!  Our time together was hilarious, heartfelt, and altogether too short.  It reminded me that I have been wanting to share her writing with you for some time.

Kira has the chops to sing jazz and soul and has lived enough life to sing the blues. She is an in-demand session singer with such icons as Willie Nelson, Garth Brooks, and Wynonna Judd, and a featured singer with Martina McBride, Radney Foster and Lynda Carter (Wonder Woman). She has been welcomed onto the sacred stage of the Grand Ole Opry, and as a self-proclaimed "Singer Nerd," knows whereof she speaks when it comes to singing.

On top of that, she and her husband own and operate Sid Gold's Request Room, the only bar in Nashville that does *not* center the guitar!  Oh, and did I mention she does all this WHILE fostering kittens in her home?  SHE DOES.

Reading a blog from Kira is just like having a conversation with her.  The tangents!  The vernacular!  And most of all, the ideas!

While this article is a rebuttal to the idea that singers aren't "real" musicians, my favorite part of this blog when she says "...whether or not someone reads music doesn’t determine their “real musician” status."

In a world with so many boxes to check and so many hoops of legitimacy to clear EVEN JUST IN MY OWN MIND as an artist, I hope you will find this, as I do, a refreshing reminder to let all that go, and just focus on "nailing it to the wall."

With no further ado, Kira Small:

"Have you ever heard someone refer to singers as “not real musicians”? ”

Yeah me too. Grrr. While it’s possible that particular someone was a an a*s, it’s also possible they were simply ill-informed.

So in the interest of diplomacy, let me ‘splain a little bit about the aspects of music mastery that make a professional singer. It ain’t just shaking a tambourine and oo-ing.

Tangent right out of the gate: tambourine is much easier to play badly than it is to play well, which is why “NO YOU CAN’T” is the answer to your drunk a*s in the audience when you ask if you can play mine. But let’s get back to oo-ing.

I could write a whole blog about that vowel alone and just about make my point. Is your oo a pure, rounded shape or more closed and country styled? Does your vowel sound match the lead vocalist’s or other background singers’? Are we talking breathy atmospheric oo’s or Millie Kirkham’s signature soprano on Blue Christmas oo’s? Straight tone or vibrato? THAT’S ONLY ONE VOWEL. Let’s continue, shall we? *puts down tambourine.

In addition to making my own records, I’ve been working in Nashville as a pro singer for 15 years – from live and studio work with major label artists to demos for songwriters to choral sessions with 16 of us tracking (and reading) all in one room where if one person screws up everyone has to punch in. (That’s kind of my favorite sport. I’m also kind of a dork.) This town is full of some seriously bad ass mofosingers you’ve most likely heard, but never heard of.

Some of those mofos read notes, some do stuff by ear with numbers, some just do stuff by ear with their own system or no system at all. They may not know if they’re singing a 4, a G or an M&M, but if they consistently nail it to the wall they’re gonna get the gig. Whether or not someone reads music doesn’t determine their “real musician” status.

I happen to be a reading nerd so I love when things are arranged and scored, which they still are sometimes. But most singers use numbers here, and I can nerd out on that just as easily. In this context, numbers represent scale degrees, just like (moveable do) solfege. (In key of C: C-D-E = do-re-mi = 1-2-3, etc.)

When I have to demo a song for a writer or learn a bunch of back-up parts for a live gig, a lot of times I’m working from a rough version that’s not in the same key I’m going to sing it in. Making a chart using notes would be a pain in the a*s. But if I know I start on the 3 it doesn’t matter what key the song ends up in – my chart will be right. Same thing for the players, which is why The Nashville Number System is what’s used on 95% of sessions here. It has nothing to do with whether or not players or singers can read music. (See end of previous paragraph.)

When you show up on a session and all you get is a lyric sheet with no parts written, you’ve gotta come up with them, sometimes as a group. (Yup – we have to be arrangers too.) Those are called “head chart” sessions here. (I guess cuzwe’re doing stuff off the top of our heads? I don’t know – I wasn’t around when they named sh*t.) On these we use numbers to help us navigate parts. If you want to see that happen in real time go to the Opry and watch the background singers. Carol Lee used to throw so many hand signals - numbers, oo vs. ah, which direction to resolve a chord – she looked like a baseball manager or a gang member. She’s retired now but someone else is probably doing it. It’ll bend your brain.

Ponder this for a sec: whether we’re reading notes or numbers, singers actually HAVE to hear stuff first – cuz we don’t have frets or keys we can place fingers on. (When I taught sight reading at Berklee I called it reverse ear training.) Some of us have to do all of that in heels, false eyelashes and spanx. While doing choreography. And smiling while your drunk a*s in the audience tries to grab the fricking tambourine. (OK I might have an issue there. Sorry. But seriously. Stop that.)

Then there’s the lyrical component too. We might get hired to sing something we have zero emotional connection to (or that flat out SUCKS – often referred to as “putting lipstick on a pig”, “polishing a turd”…), but if whoever hired us gets even a whiff of that we sure won’t get hired again. Flip side is singing something we have a little TOO much of an emotional connection to.

“Fun experiment: next time you find yourself trying not to cry, start singing something that will absolutely make you cry. Now stay in tune. Now put on some false eyelashes….”

Finally: yes, it’s true, we don’t have amps or drum kits we have to haul around and set up. Instead, we schlep our stash of tea, honey, ginger, lemons, throat spray, six kinds of lozenges, and enough water to drown a rhino. We don’t have to carry heavy gear. But we also don’t have the luxury of putting our instrument in a case to protect it, because we inhabit it. Context: singing with a cold is like trying to play guitar after someone poured syrup all over the fretboard. It’s gross and it sounds weird.

I could probably go on, but I’m borderline ranting already. Plus I just drank a drowned rhino’s share of water and really have to pee. I’ll leave you with this request: next time you see a singer at work, give them a nod of respect. And don’t you dare reach for that tambourine." - Kira Small

You can pick up Kira's guide to the Nashville Number System here.